For this post (transferred by the Boston Public Library - restored by me) we have a release from the official record label of the UCLA Department of Ethnomusicology. 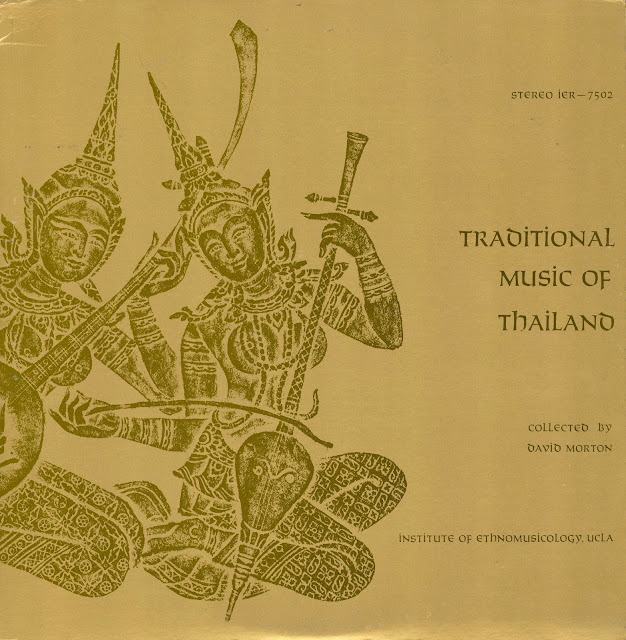 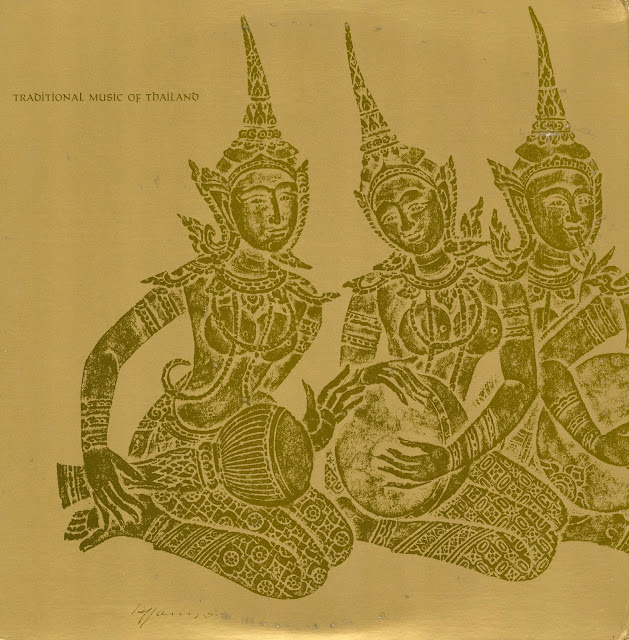 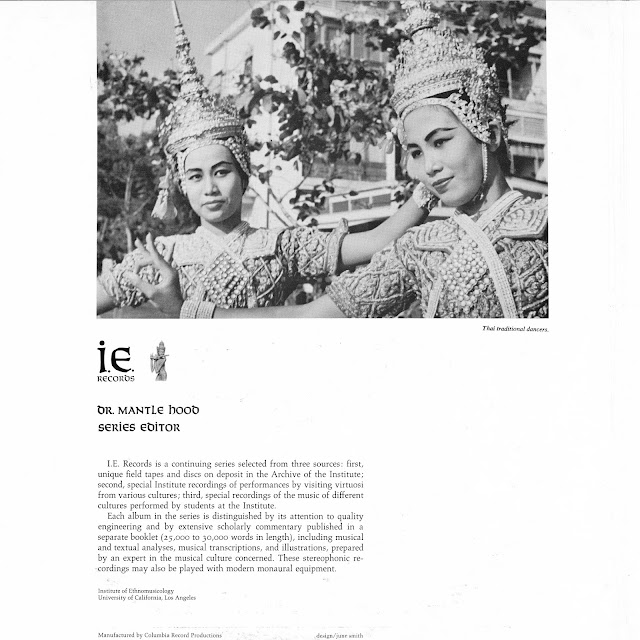 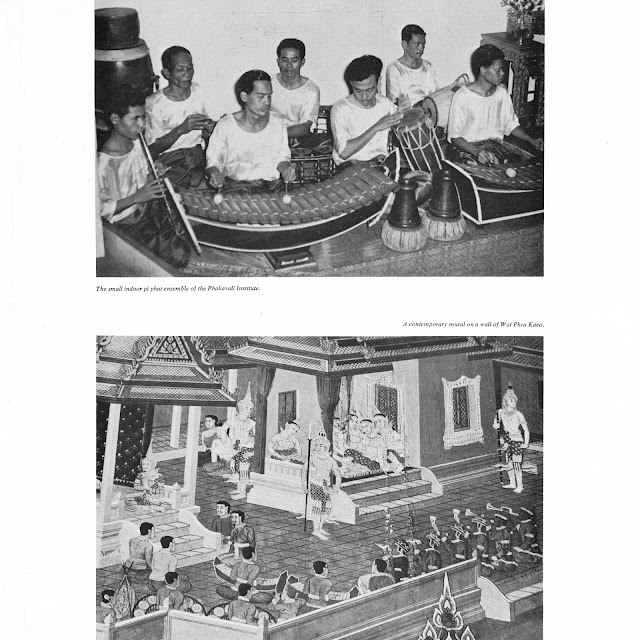 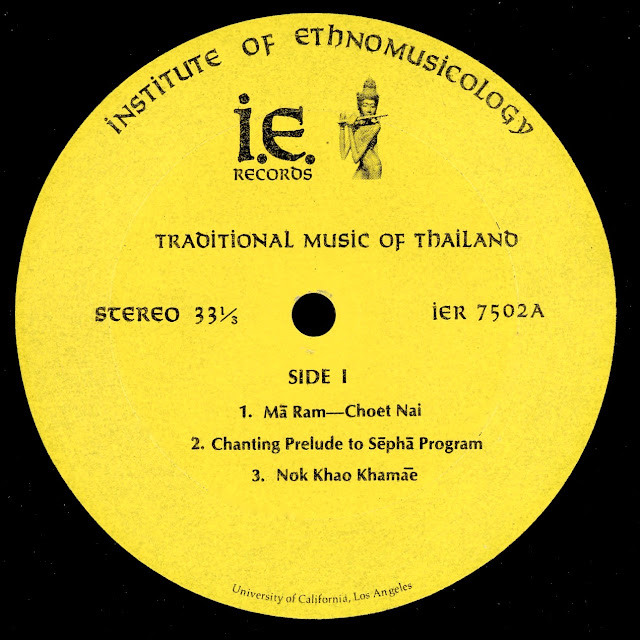 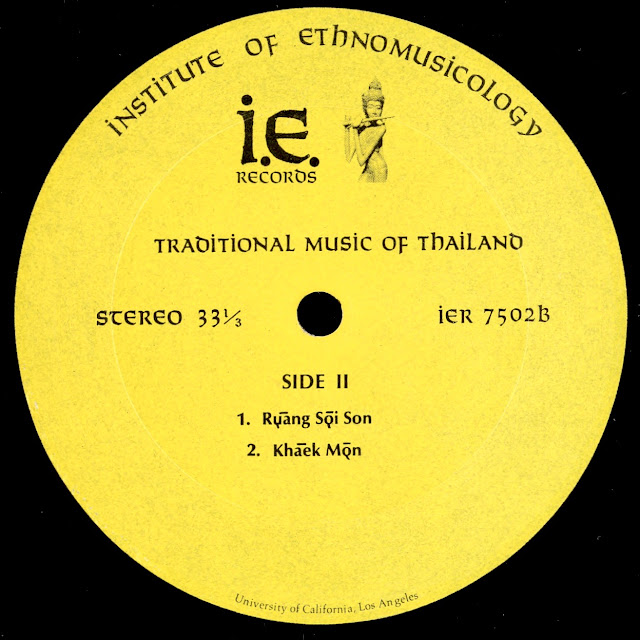 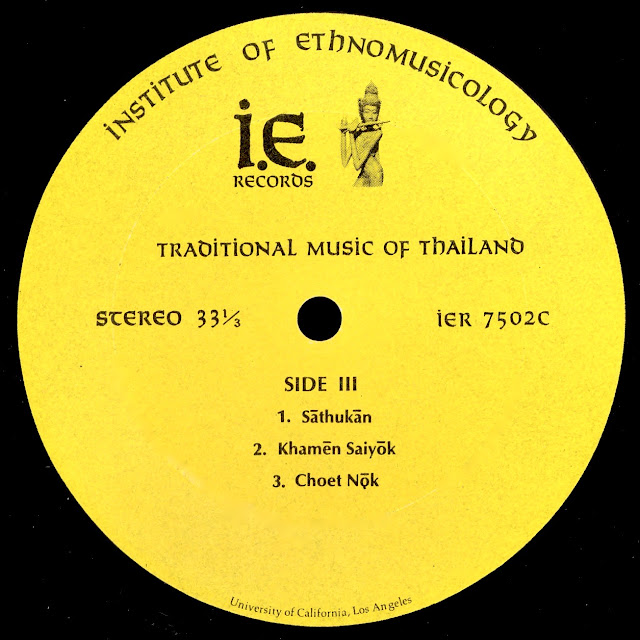 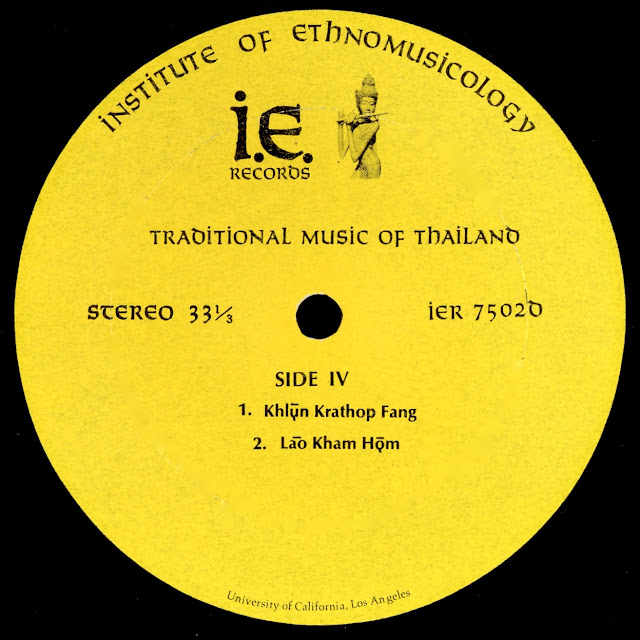 Discogs has this to say about the label:

The Institute of Ethnomusicology was established in 1961 at the University Of California-Los Angeles and existed until 1974. This organization hosted numerous musicians and instructors from different world traditions, purchased a vast collection of world music instruments, and supported one of the largest traditional sound archives in the USA. The Institute conducted research in systematic musicology, particularly the development and use of the automatic music writer Melograph. The Institute released some records with I. E. Records in the late sixties and early seventies.

These recordings were made by David Morton and some notes about the recordings (again from Discogs) are as follows:

The monophonic original recordings of the compositions on these records were done with a single Electro-Voice 666 microphone feeding an Ampex 601 full-track recorder. The concert at the Erawan Hotel was recorded on 1 mil polyester Sctoch tape No. 150. Most of the other recordings were made on 1 1/2 mil acetate, Audiotape No. 1251.

Re-recording employed Amphex 300 recording equipment. The material was electronically reprocessed to stereo through equalization tailored specifically to each recording. In general, the low frequencies were placed on the right and the high frequencies on the left, with care being taken to maintain the original balance between high and low frequencies.

Issued in a gatefold jacket, and accompanied by a separate 47 page booklet of scholarly commentary and analysis.

A1 - Mā Ram ("Dancing Horse"), followed immediately by solo versions of Choet Nai on the pī, ranāt ēk, and ranāt thum. Overture: sām chan. Pī phāt ensemble. Recorded July, 1960; performed by the musicians of the Phakavali Institute at the Erawan Hotel in Bangkok.

A2 - Chanting Prelude to Sēphá Program. Vocal solo with krap sēphā. Recorded in July, 1960. Performed by a musician of the Phakavali Institute at the Erawan Hotel in Bangkok.

A3 - Thao. Pī phāt ensemble with vocal soul. Recorded in July, 1960. Performed by the musicians of the Phakavali Institute at the Erawan Hotel in Bangkok.

B1 - Suite. Pī phāt ensemble. Recorded on August 2, 1959. Performed by young male students of the Department of Fine Arts at the Phakavali Institute, Bangkok.

B2 - Instrumental solos on the khǭng wong yai and khǭng wong lek. Recorded on August 1, 1960. Performed by the musicians of the PHakavali Institute during one of the weekly ceremonies on Monday night which were observed during the three-month mourning period following the death of Luang Pradit's wife.

C2 - Sām chan. Mahōri ensemble with vocal solo. Recorded on July 26, 1960. Performed by musicians of the Phakavali Institute, at the Institute.

D1 - Overture; sām chan (a preceding short section in free rhythm, not actually part of the composition, is included on the recording for interest). Pī phāt ensemble. Recorded on August 2, 1959. Performed by the musicians of the Phakavali Institute, at the Institute, during the annual wai khru celebration.

D2 - Sǭng chan. Khrų̄ang sāi ensemble with vocal solo. Copied in July, 1960, from a tape of the Publicity Department, Bangkok.